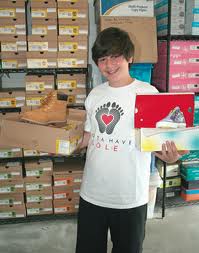 What do you want to be when you grow up? What things do you want to accomplish when you’re an adult? How WILL you make a difference? These are all frequent questions young people are asked. Are we as parents, teachers, mentors and youth workers best preparing them for their future? Sometimes the difference between the child who became an astronaut and the one whose dreams were never realized is simply, the ability to dream big and learn how to start making a difference starting now. What we should be asking them is: why wait?

An outlier is a person whose abilities and achievements lie outside the range of statistical probability. Outliers come in all shapes, sizes, and ages. We can all learn a lesson from an inspirational 15-year-old, Nicholas Lowinger, who visited his first homeless shelter with his mother at 5-years-old. His mother’s dedication to helping those less fortunate had a heavy influence on him. Little did his mother know that one visit would plant a seed that would later grow into a movement. The young Lowinger saw the worn and tattered clothing of the homeless children and decided it was time to make a difference.

Nicholas Lowinger is a perfect example of a young outlier making a big difference. It is kid’s like him that inspired John Shufeldt’s new book Ingredients of Young Outliers which will be released March 25, 2014. The book is aimed at inspiring youth to push the limits and join the ranks of those who dream big. Thanks to Nick and students like him who we can call “outliers”!