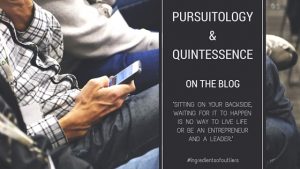 From Chapter 16 “The Rare Find” in Ingredients of Outliers,

Have you noticed that action and success seem to go hand in hand? People of action are the ones who are finding success. Sitting on your backside, waiting for it to happen is no way to live life or be an entrepreneur and a leader. You have to work harder and smarter than everyone else. Everyone has the ability to do this, if he or she so chooses. But whatever you do, don’t let your life pass and bemoan what could have been when you have all the tools to do it, to set the pace.

One of the most often overlooked aspects of leadership is the need for pursuit. Great leaders are never satisfied with traditional practice, static thinking, conventional wisdom, or common performance. In fact, the best leaders are simply uncomfortable with anything that embraces the status quo. Leadership is pursuit—pursuit of excellence, of elegance, of truth, of what’s next, of what if, of change, of value, of results, of relationships, of service, of knowledge, and of something bigger than themselves

Here’s the thing—pursuit leads to attainment. What you pursue will determine the paths you travel, the people you associate with, the character you develop, and ultimately, what you do or don’t achieve. Having a mindset focused on pursuit is so critical to leadership that lacking this one quality can sentence you to mediocrity or even obsolescence. The manner, method, and motivation behind any pursuit is what sets truly great leaders apart from the masses. If you want to become a great leader, become a great pursuer.

Smart leaders understand it’s just not enough to pursue, but pursuit must be intentional, disciplined, focused, consistent, aggressive, and unyielding. You must pursue the right things, for the right reasons, and at the right times. Perhaps most of all, the best forms of pursuit enlist others in the chase. Pursuit in its purest form is highly collaborative, very inclusive, and easily transferable. Pursuit operates at greatest strength when it leverages velocity and scale.

I also want to caution you against trivial pursuits—don’t confuse pursuit with simple goal setting. Outcomes are clearly important, but as a leader, it’s what happens after the outcome that you need to pursue. Seek dissenting opinion, pursue discovery, develop your ability, unlearn by embracing how much you don’t know, and find the kind of vision that truly does see around corners. Don’t use your pursuits to shift paradigms, pursue breaking them. Knowing what not to pursue is just as important as knowing what to pursue.

It’s important to keep in mind that nothing tells the world more about leaders than what or who they pursue—that which you pursue is that which you value. If your message to your organization is that you value talent, but you don’t treat people well and don’t spend time developing the talent around you, then I’d suggest you value rhetoric more than talent. Put simply, you can wax eloquent all you like, but your actions will ultimately reveal what you truly value.

Lastly, the best leaders pursue being better leaders. They know that to fail in this pursuit is nothing short of a guarantee they’ll be replaced. All leaders would be well served to go back to school on what I refer to as the science of pursuitology.

The Greeks had a word for it. They called it pempte ousia. To the Romans, it was quinta essentia. In ancient times, these names were given to a concept that attempted to explain what was otherwise unexplainable.

The Greeks, the Romans, and their counterparts in other civilizations believed everything in the world was made up of four basic elements: air, earth, fire and water. That theory seemed to work, except with humans. Man was obviously something more, something that set him apart from the rest of creation.

Therefore, the logic went, there had to be a fifth element, a quinta essentia, that gave man the power to think and talk, and that caused him to seek after God. Of all the species that have ever inhabited the earth, homo sapiens alone builds altars. No matter how primitive or how advanced the culture, man worships someone or something, driven by this innate element, this quinta essentia, or quintessence.

Over the centuries, the word “quintessence” has taken on broader meanings. Its definitions include: the consummate instance; the most perfect manifestation of a quality or thing; the purest form of anything; and the transcendent specimen of a given class.

In today’s disposable, biodegradable, assembly-line, cookie-cutter society, the quality of quintessence, this “consummate instance,” this “most perfect manifestation,” this “transcendent specimen,” has been lost—sacrificed on the altars of mediocrity and imitation?

Authors Betty Cornfeld and Owen Edwards beg to differ. In their wonderful book, Quintessence: The Quality of Having It, they claim that “Quintessence lives, as vitally as ever; it’s just harder to discern amid the undistinguished plenty of our times.”

Cornfeld and Edwards also note that, “With the advent of mass production, the odds against quintessence grow and have continued to grow… Since the Industrial Revolution, it has become possible to assume that quintessence is inconsistent with mass production and the premise is hard to deny.”

Just as the ancient Greeks and Romans believed in the four basic elements of air, earth, fire and water, so many of today’s business and professional men and women seem to focus on the four elements of volume, profits, cash flow, and net worth as the ingredients of success. Little thought seems to be given to the “fifth element,” the quintessential, the quality that separates the very good from the very best.

Today, in our personal and professional lives, can we become that “perfect example,” that “transcendent specimen?” Quintessence is a rare and multi-faceted jewel, “always there to be found. It is the good news, shining through the bad.”

In the words of Cornfeld and Edwards: “Although quintessence cannot be found in abundance in our claptrap age, its ancient voice still whispers beneath modern exteriors and we do well to recognize it and seek it out.”

The rare find! The one of a kind! Let the quest begin!

Next Week: Striving to Continuously Improve

Previous Week: If it Ain’t Broke…

Previous: 7 Creative and Social Ways to Get Fit without the Gym
Next: Striving to Continuously Improve