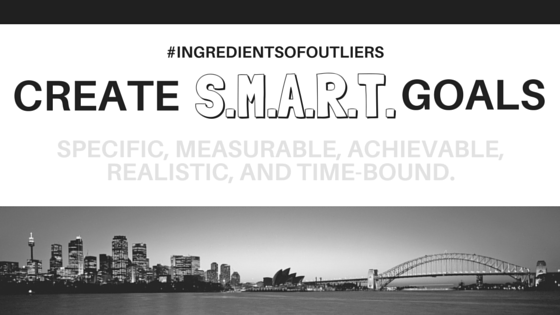 From Chapter 13 “Efficiency” in Ingredients of Outliers.

Put It in Writing

One of the best ways to become more efficient in every area of your life is to set goals for yourself. I’m not talking about pipe dreams or bucket lists or wish lists. I’m talking about what are known as S.M.A.R.T. goals, goals which are Specific, Measurable, Achievable, Realistic, and Time-bound. And they must be written goals. As well-known speaker, consultant, and author Tom Hopkins advises: “An unwritten want is a wish, a dream, a never-happen. The day you put your goal in writing is the day it becomes a commitment that will change your life. Are you ready?”

Of course, having those goals won’t do us much good unless we take the next step and act on them. In his award-winning book, Moving from Activity to Achievement, author/speaker Les Taylor writes: “Actions are those specific tasks we must accomplish in order to achieve our goals. Actions, like goals, must be measurable but, unlike goals, are proximate, short-term and quickly accomplished.”

Putting those tasks in writing, such as making “to-do lists,” is an especially good way to become more productive and efficient. That principle is perhaps best illustrated by a century-old story that has become famous in business circles. It involved high-rolling and flamboyant Charles M. Schwab, CEO of Bethlehem Steel Corporation and a man named Ivy Ledbetter Lee, considered by many a founder of modern public relations. He was also what was then popularly known as an “efficiency expert.”

It was in that capacity that Lee, aware of Schwab’s interest in improving his own efficiency and that of his management team, approached him. He told Schwab he could accomplish that goal simply by spending a few minutes with each manager. When asked what his fee would be, Lee replied that it would cost Schwab nothing, he was simply asking that the system he would suggest be tried for three months. At that point, Schwab would pay him whatever he felt it was worth.

Lee’s advice was simple. Each person was to write a list of his most important tasks and number them in order of importance. Each task was to be tackled in that order—and completed—before moving to the next one. Unfinished tasks at day’s end would be moved to the following day’s list. All the participants agreed to follow Lee’s plan for three months. At the end of that period, Schwab was so impressed by the results that he reportedly sent Lee a check for $25,000, equal to many times that amount today.

The Age of Technology

We don’t have to look very far these days to recognize the enormous impact technology has had on virtually every facet of our lives. Many of the changes we’ve seen have helped us run our lives and our organizations more efficiently than ever before. Many of today’s giant companies—Apple, Microsoft, Amazon, Dell, Facebook , and so many others—didn’t even exist a generation or so ago. Today we can do our banking, pay our bills, buy our groceries (and just about everything else we need), conduct our meetings, see a doctor, and visit with family and friends—all without having to leave our homes or our offices. Technology may or may not have made our lives easier, but has certainly provided the tools to make us more efficient.

With degree in hand, he headed to New York, beginning a brief but very successful career in banking. Computer science remained his first love, however, and at age 30 he launched his own company, named Cadabra. Within just a few years that young man and his company would achieve worldwide success and fame.

At this point, you may be asking yourself: “Why haven’t I ever heard of either Jeffrey Jorgensen or a company named Cadabra?” Well, it’s confession time, so let me clear things up for you. Not long after Jeffrey was born, his parents divorced, and five years later his mother married a man named Miguel Bezos, who legally adopted her young son. As for the name Cadabra, Jeff Bezos changed it in 1995—to Amazon. In true entrepreneurial fashion, Bezos started his company in his garage in Seattle. Today, as Chairman and CEO, he oversees a company with 56,000 employees, serving more than 160 million customers around the world. What began as a small online bookseller now has more than twenty million products in stock, ready to be shipped as soon as the orders come in. Amazon, started less than 20 years earlier, has become the Internet’s largest retailer.

What’s behind such incredible growth? The answer, of course, lies primarily with its founder, whose passions are serving customers and continually improving efficiency. In 1999 when his company was just five years old, TIME magazine chose Jeff Bezos as its “Person of the Year.” In an article in that issue, Microsoft’s Bill Gates had this to say about him: “He understood from the beginning that he wasn’t just inventing a new and more efficient way for people to find the books they wanted to buy, but that he was also helping to define a fundamentally new way to conduct a consumer retail business.”

For Bezos, customer service and efficiency go hand in hand. In a recent article in SUCCESS magazine (August 2011), two quotes make that clear. “Our vision,” he said, “is to be earth’s most customer-centric company, to build a place where people can come to find and discover anything they might want to buy online.” The book business remains a key part of Amazon’s business and Bezos’ goal is to “sell every book ever printed, in any language, in and out of print, in less than 60 seconds.”

Previous: Be Humble Day!
Next: Employee Appreciation Day is THIS Friday! Check out these ideas for every budget