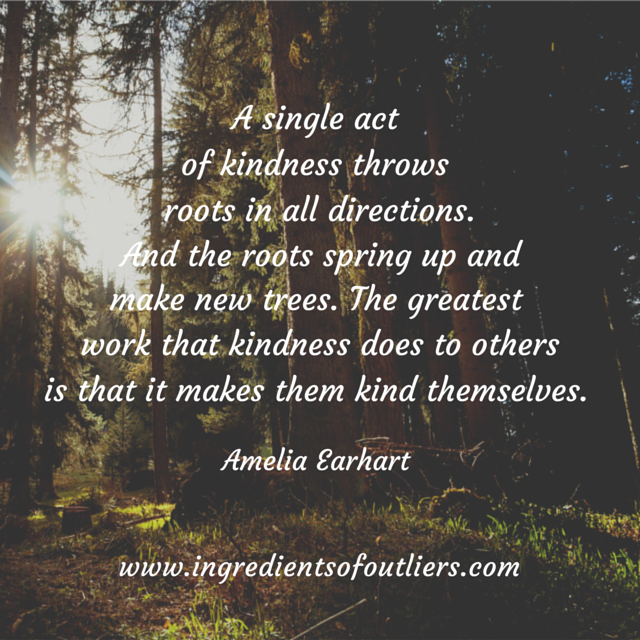 From Chapter 8, “Kindness: The Art of Paying it Forward” in Ingredients of Outliers

If you set out to be a kinder person, which is a worthwhile goal for all of us, be sure it’s for the right reasons. If you’re just out to make yourself look good or if you expect to get something in return, that’s selfishness rather than kindness. It’s known as WIIFM, which stands for: “What’s In It For Me?” While I admit in advance that the following is an extreme example, please don’t follow the advice of Al Capone, the notorious Prohibition-era gangster: “You can get much further with a kind word and a gun than you can with a kind word alone.”

No, no, Al! Pointing a weapon at someone while you hold out your hand for his wallet is definitely not kind, no matter how politely you make your request.

Speaking of pointing a gun, for more than a decade I’ve been a “SWAT Doc,” initially with the Arizona Department of Public Service and, since 2003, with the Phoenix Police Department. The four physician members of the team go through SWAT Team training, physical fitness and handgun qualification. Although we’re all armed, if we’re the ones shooting, it will be a very bad day.

A few years back, I participated in the apprehension of a man with a solid—albeit illegal—business model. He’d rob other drug dealers at gunpoint (an Al Capone devotee) and steal their cash, weapons, and drugs. Not a bad business model. What are the victims going to do, call the police? His plan was ultimately discovered and he drew the ire of the police department. He was considered heavily armed, dangerous, and unpredictable.

Early one morning, eighteen of us loaded into three vans to storm the house of his girlfriend, where he was allegedly hiding out. As we approached the house, a neighbor heard him slapping his girlfriend around and called to report a domestic violence complaint. The sergeant in charge of the raid told the dispatcher not to send any help, as we were at that moment about ten seconds from “hitting his house.” We pulled up, the vans emptied, doors and windows were breached and the bad guy was dragged out in tighty-whities without a fight.

I remember thinking about that neighbor who, out of concern and kindness, called the police for a domestic violence complaint and, seconds later, witnessed eighteen people, dressed in black Kevlar and carrying automatic weapons, storm the house, break in the windows, blow the doors off, and drag out the suspect. That neighbor must have been thinking, “Holy crap! They take domestic violence seriously here!”

Another American who became famous during the Great Depression was aviation pioneer Amelia Earhart, whose view of kindness was quite different than Capone’s. “A single act of kindness throws out roots in all directions,” she said, “and the roots spring up and make new trees. The greatest work that kindness does to others is that it makes them kind themselves.”

And now here is my secret, a very simple secret, it is only with the heart that one can see rightly, what is essential is invisible to the eye.

Remember there’s no such thing as a small act of kindness. Every act creates a ripple with no logical end.
~ Scott Adams

I wonder why it is that we are not all kinder to each other than we are. How much the world needs it! How easily it is done!

One of the most difficult things to give away is kindness – it is usually returned.

A kind heart is a fountain of gladness, making everything in its vicinity freshen into smiles.

The effects of kindness are not always seen immediately. Sometimes it takes years until your kindness will pay off. Sometimes you never see the fruits of your labors, but they are there, deep inside the soul of the one you touched.

I expect to pass through life but once. If, therefore, there be any kindness I can show, or any good thing I can do to any fellow-being, let me do it now, and not defer or neglect it, as I shall not pass this way again.

Constant kindness can accomplish much. As the sun makes ice melt, kindness causes misunderstanding, mistrust, and hostility to evaporate.

Two important things are to have a genuine interest in people and to be kind to them. Kindness, I’ve discovered, is everything in life.

Kindness is more than deeds. It is an attitude, an expression, a look, a touch. It is anything that lifts another person.

Kindness is a language which the deaf can hear and the blind can read.

So many paths that wind and wind; When just the art of being kind
Is all this sad world needs.

You cannot do a kindness too soon, because you never know how soon it will be too late.

Previous: Going the Extra Mile
Next: Learning: A Lifetime Pursuit