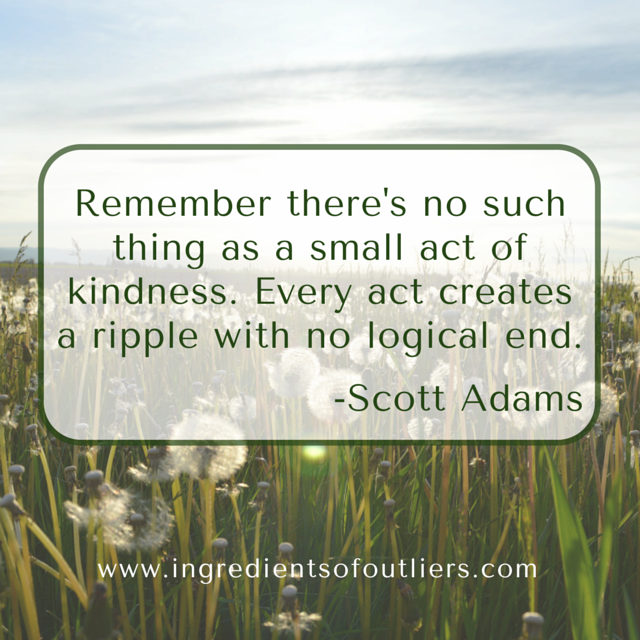 From Chapter 8, “Kindness: The Art of Paying it Forward” from Ingredients of Outliers

A Touch on the Shoulder

But we can do more than imagine it. Consider the story of Dudley Henrique who was—literally—touched on the shoulder by a stranger, a kind touch that would mark the beginning of a new life, while there was still time.

Dudley’s early life wasn’t easy. Born in 1937, he was six when his parents divorced. His mother was soon remarried—to a hot- tempered man who would beat him severely and often. Two years later his grandmother came to his rescue, taking him to live with her in Wilmington, Delaware. He never saw his mother again.

He spent the next eight years living with his grandmother, a working woman who had little time for him. Not surprisingly, he often got into trouble and, at 15, was expelled from school. His grandmother then enrolled him in a military academy known for working with problem children, but less than a year later he was expelled again and was back on the streets of Wilmington. He was 16.

With nothing to do one day, he took a bus ride to nearby New Castle Air Base, home to the Delaware Air National Guard. There, in a hangar, he got his first close-up look at an airplane. “It was a World War II P51 Mustang fighter,” he wrote. “I was hypnotized!” After walking all the way around the plane, he climbed up on the wing and into the cockpit.

He was soon spotted by a guard, who yelled at him to get down. Frightened, he started to obey but was stopped, as a hand on his shoulder began gently pushing him back into the cockpit. Turning, he looked into the face of an Air Force captain wearing a flight suit. His name was James R. Shotwell, Jr. but, reported Dudley, “by the time I left the field that day he had become ‘Jim.’”

During the months that followed, Shotwell spent many hours with the troubled teenager, introducing him to his Air Force comrades and encouraging him to turn his life around. But it didn’t last long. His grandmother had had enough of his bad behavior, and he was sent to live with an aunt in Southern California. But Jim Shotwell wasn’t about to give up and he wrote to Dudley often. “Those letters,” he said, “brightened my days.”

Then, on March 19, 1955, came the awful news that 33-year-old Shotwell had been killed when the engine of his plane quit and he crashed. He could have saved himself by ejecting, but was close to a populated area and refused to risk it. By the time he maneuvered to a safer place, it was too late to eject and he died on impact.

Dudley, who’d been unwilling to change his ways, was devastated at the news. The only real friend he’d ever had, the only one who had treated him with so much kindness, was gone. But those seeds of kindness Jim Shotwell had planted in his mind began to take root. “I started to think of Jim,” he wrote, “and the many things he had said to me. Instinctively, I was aware that something had changed. Now I knew where I was going in my life and what I would have to do to get there.”

He spent the next four years in the Air Force and, after his discharge in 1959, went on to earn a pilot’s license. Flying was now his life. He became a certified flight instructor and developed a talent in acrobatic flying. “By 1971,” he wrote, “I had accumulated thousands of flying hours, flown more than a hundred air shows, and lectured all over the country to flight instructors learning the trade. During those years I flew just about everything, including some experimental and military aircraft.”

Dudley Henrique retired from active flying in 1995, but his contributions to aviation have been by no means limited to his time in the air. He has written extensively on a wide range of aviation subjects, including flight simulation, air safety protocols, and the techniques of flying high performance aircraft. He has also donated countless hours to various organizations, including the Professional Race Pilots Association and the P51 Mustang Pilots Association, and he is a past president of the International Fighter Pilots Fellowship.

Jim Shotwell didn’t live to see the results of his kindness but, in grasping the shoulder of young Dudley Henrique, he set in motion a series of events that would cause a troubled teenager’s life to change and to bear fruit in ways he could never have anticipated.

Previous: 10 Valuable Lessons for Teens and Young Adults
Next: Five Steps Communities Can Take To Strengthen a STEM Education Program