From Chapter 7 “Tolerating Risk: Being a Doer, not a Dreamer” from Ingredients of Outliers 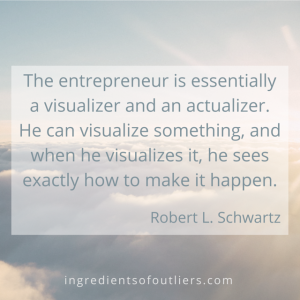 To me, entrepreneurism is simply taking something you’re passionate about and turning it into capital so you can do more of it. Passion without monetization is called a hobby.

I’m what you’d call a serial entrepreneur; I’ve tried (and more often than not, failed) at more businesses than you can imagine. (You may recall my hot dog stand adventure and others that I described in Chapter 2.) Although failing’s never fun, if you keep your mind open it will teach you more than success ever will. So let’s look at and discuss some characteristics of successful entrepreneurs and share a story or two about those traits.

Being visionary can be both a blessing and a curse. Decide if you are an innovator, early adopter, or superior operator.

Innovation can be a risky business inasmuch as you end up telling the masses that they’re in need of something of which they’re currently unaware.

Being an early adopter has some benefits. You let the innovator pave the way by educating the masses and hitting all the landmines.

A superior operator is something all entrepreneurs have to become to achieve any lasting success.

I began this chapter with a quote by Nolan Bushnell. You may not recognize that name, so let me tell you a little about him. Born in 1943, he went on to earn a degree in electrical engineering. But it was while working at an amusement park during his high school and college years that his vision began to take shape; it was the midway arcade games that drew most of his attention.

During his career, Bushnell has started more than 20 companies, primarily in the game industry. They include such well-known names as Atari, Inc. and Chuck E. Cheese’s Pizza-Time Theaters. He’s been inducted into the Video Game Hall of Fame and was named by Newsweek magazine as one of the “50 Men Who Changed America.” His definition of a true entrepreneur as “a doer, not a dreamer” fits him well.

Another serial entrepreneur, 20 years younger than Bushnell, is Warren Struhl. He currently holds the position of Chief Inspiration Officer at Successories, Inc., the leading inspirational, motivational, and recognition products company he acquired in 2008. Years earlier, at age 25, he founded his first business, PaperDirect, Inc. Five years later, with more than $100 million in sales, he sold the business to a Fortune 500 company.

That began a series of launching a dozen or more ventures in rapid succession. In addition to his Successories post, he partnered with famous basketball star LeBron James and others to co-found Purebrands, LLC, producer of the popular SHEETS Energy Strips. Struhl is also a published author; his book, Starting Them UP, released in 2010, is subtitled: Timely, Under-the-Hood Insights for Entrepreneurs by a Serial Starter and a Bunch of His Entrepreneurial Friends. In the opening chapter he writes: “Possessing the ‘DNA’ of an entrepreneur means being a fearless, fiercely motivated self-starter.”

Then he adds these cautionary words: “The roller-coaster, often rough-and-tumble high-stakes world of the start-up entrepreneur may not be an ideal career choice for the faint of heart or the risk- averse.”

Personally, I can’t really think of anything worth achieving that’s not high risk. It may not be life threatening and you may not lose a lot of money, but there is risk involved. Changing jobs, moving, and venturing out of your comfort zone are all risky endeavors. Some of the coolest sports I know are the most risky—hang gliding, scuba diving, and base jumping. Some people believe the rewards are absolutely worthwhile. That’s not to recommend you go out and do extreme sports or anything else. It’s simply that great rewards are often the result of calculated risks.

The good news is that I’ve made every mistake in the business play-book—some of them nearly fatal. In the end, it will work out, no one is dying, and chances are I’ll be better off.

If you invest in a start-up company the risks are very high; most of them fail miserably. However if it works, the upside may be worth the risk. If not, when it all blows up and you look and feel like a fool, be secure enough to laugh at yourself.

Previous: Powerful Body Language of Leaders- How are you portraying yourself?
Next: Key Traits of an Entrepreneur