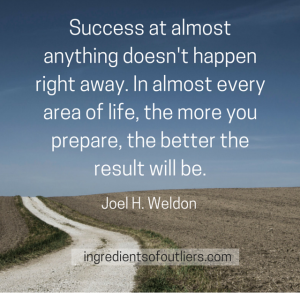 From Chapter 4, “Preparation: When the Wind Blows” in Ingredients of Outliers

There’s an old tale about a wealthy farmer whose large dairy farm covered several hundred acres along Maine’s Atlantic coast. Because of the sudden and severe storms that would blow in frequently from the ocean, the farmer had trouble keeping hired hands. As soon as one of these storms would hit, they’d be on their way to safer places inland, leaving farm equipment and frightened cattle out in the storms.

Then one day a young man showed up at the farmer’s front door looking for work. As the farmer began asking him about his experience as a farmhand, the young man would simply answer: “I can sleep when the wind blows.” The farmer had no idea what he meant, but the last of his helpers had taken to his heels a week or so earlier, and the farmer was desperate, so he hired him on the spot.

A few nights later the farmer was awakened by a roaring storm that had suddenly blown in off the coast in all its fury. Hurrying to find his helper, he found him sound asleep in his bunk. “Wake up! Wake up!” he yelled, but the young man simply said as he rolled over, “I can sleep when the wind blows.” No matter how many times the farmer tried to get him out of bed, the answer was always the same.

Angry and frustrated, and determined to fire the young man as soon as morning arrived, the farmer rushed out into the storm. The first thing he noticed was that all the equipment had been tied down and covered with tarpaulins. Running to the barn, he found all the cows safe in their stalls. All the doors and shutters had been secured. Suddenly, the farmer remembered the young man’s words. Understanding now what he meant, he too was able to go back to bed and sleep, while the wind kept blowing.

I can hardly imagine a profession, a career, or even an entry-level job where preparation isn’t at least advantageous, ranging on up to important, critical, indispensable, and even life-saving. As a physician and as a pilot, I can’t imagine how anyone can consider entrusting their safety, their health, and even their lives to someone in either of those fields who isn’t merely competent but is fully prepared to meet their needs, no matter what surprises or potential emergencies may be at hand—someone who can sleep when the wind blows.

Previous: Is the Creative Gap Holding you Back? Master your craft and minimize your doubt with these tips.
Next: 17 Deals to take advantage of NOW for Teacher Appreciation Week