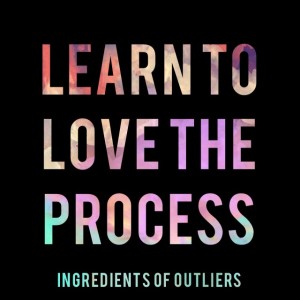 From Chapter 2: “Fail Fast: The Gift of Failure” in Ingredients of Outliers

All successful people were failures along their journey—the only difference is that they learned and persevered.

If it was easy, everyone would do it, and then it wouldn’t be an accomplishment, it would be an expectation.

Failure is just another way to learn how to do something right.
~ Marian Wright Edelman

An inventor fails 999 times, and if he succeeds once, he’s in. He treats his failures simply as practice shots.
~ Charles F. Kettering

Failure will never overtake me if my determination to succeed is strong enough.
~ Og Mandino

There are always reasons for giving up. There is no such thing as failure except to those who accept and believe in failure.
~ Orison Swett Marden

Remember there are two benefits of failure. First, if you do fail, you learn what doesn’t work; and second, the failure gives you an opportunity to try a new approach.
~ Roger von Oech

Most people give up just when they’re about to achieve success. They quit on the one yard line. They give up at the last minute of the game, one foot from a winning touchdown.
~ H. Ross Perot

He who hopes to avoid all failure and misfortune is trying to live in a fairyland; the wise man readily accepts failures as a part of life and builds a philosophy to meet them and make the most of them.
~ Wilferd A. Peterson

We learn far more about ourselves in our failures than in our successes. Failure is the greatest teacher of all. Failure dramatizes where we are yet incomplete, and points the way to wholeness. So failure may be the future signaling to us.
~ Robert A. Raines

Failure is not failure to meet your goal. Real failure is failure to reach as high as you possibly can. No man will ever truly know that he has succeeded until he experiences an apparent failure.
~ Robert Schuller

We learn wisdom from failure much more than from success. We often discover what will do, by finding out what will not do.
~ Samuel Smiles

Forget about the consequences of failure. Failure is only a temporary change in direction to set you straight for your next success.
~ Denis Waitley

Previous: Hard Work and A Little Bit of Luck
Next: Are Outliers Likable? What can be Learned from the Trending 13 Habits