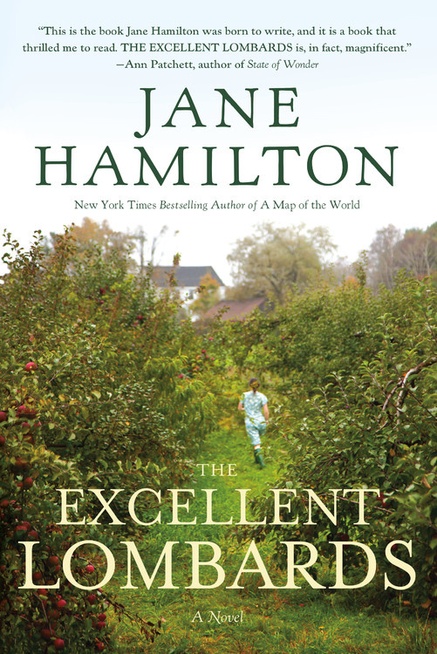 It can’t be great, even for a best-­selling author, to find out that a second best-selling author has also written a new novel about a family’s obsession with its apple orchard. Think of the potential for confusion. Or all the weak “how do you like them apples” jokes that might have to be endured at readings. But the latest ­Tracy Chevalier and Jane Hamilton novels, stylistically distinct, respectively, as plot-heavy historical fiction and leisurely evocative contemporary literature, form a complementary double feature. Paired, they make the case that the beautiful lunacy of trying to earn a living from the land hasn’t changed all that much in the last two centuries.

“They were fighting over apples again” is the opening sentence of Chevalier’s “At the Edge of the Orchard,” and for the first third of the book, that’s about the extent of what happens. Chevalier (best known for her Vermeer novel, “Girl With a Pearl Earring”) interweaves the lives of two real people, John Chapman, known as Johnny Appleseed, and the plant collector William Lobb, with that of her fictional characters. The Goodenoughs are introduced living a miserable life in 1838 in the Great Black Swamp of Ohio, where they got stuck in the mud on their way west. James would have happily stayed on his family’s farm in Connecticut, where the apple of choice was the Golden Pippin, but his kinsmen were short on land as well as patience for his slatternly wife, Sadie, and now he’s desperate to meet the requirement for a settler to claim land, namely cultivating an orchard of 50 fruit trees.

James and Sadie disagree on how the goal should be met. He likes “eaters,” particularly the apples he’s grafted with ­scions of those Golden Pippins. Sadie sides with Chapman on favoring “spitters,” suitable for making cider and applejack, and when Chapman drops by with more saplings or a jug or two of the good stuff, he and Sadie get drunk and have a fine old time. (“At the Edge of the Orchard” may be the first novel inspired by Michael Pollan; Chevalier credits his chapter on apples in “The Botany of Desire: A Plant’s-Eye View of the World” with providing “the seed” for this book.)

It’s something of a narrative mishmash. From James’s third-person perspective Chevalier succeeds in creating a sympathetic character, even though when it comes to Sadie or his five children (there were 10 in all; five died of swamp fever) he never met a rod he wanted to spare. With Sadie, she takes an unfortunate first-person deep dive into the mind of a younger version of Granny from “The Beverly Hillbillies”: “I’d hear new settlers complain bout the mud and think, Theres worse things than mud. Jest you wait.”

Indeed. The Goodenoughs get and give more than their fair share of those worse things, and it’s a relief when the story veers off to follow the most alert of their malnourished children, Robert, on his own westward journey. Even his sweet, sad epistolary accounts of many failed employment efforts (snake oil salesman’s assistant, gold miner, stableboy) are a diversion after the brutal, bloody realism of the swamp. By the time Robert falls in with Lobb and starts a whole new relationship with trees, collecting seeds and saplings from redwoods and sequoias to send to wealthy Europeans, this feels like a different book. Chevalier puts the reader in those quiet, magnificent groves right along with Robert.

Atmospherically, Chevalier is a gifted conjurer of, say, the sweaty, unwashed bedding of 19th-century America. But “At the Edge of the Orchard” is a bumpy wagon ride, a slog through mud followed by a mad gallop, including some ludicrous trips up and down a mountainside. There’s even some slapstick action involving, first, vastly pregnant women and then babies. At the end, the sudden lurch toward improbable happiness nearly gave me whiplash, but undeniably, I found it pleasing. The first third of “At the Edge of the Orchard” is as sour as a spitter, but the rest is an entertaining gobble.
Michael Pollan didn’t inspire “The Excellent Lombards” — more likely it was Jane Hamilton’s life on her husband’s Wisconsin orchard — but he would probably appreciate her tender, astute look behind the scenes at a small-scale family farm in the years when the locavore movement was just taking hold. The Lombards raise sheep, but primarily they’re an ­extended family of apple farmers, headed by two cousins, Jim and Sherwood, and a ­maiden-aunt type named May Hill. Jim’s wife, Nellie, designates the day the apple blossoms hit their peak as an informal school holiday: Blossom Day. When it arrives, she dispatches her children, William and Mary Frances, to the orchard with a picnic and an unspoken order to enjoy the beauty they find there.

Although Mary Frances resists or ignores most of her mother’s wishes, this one she embraces. For her, Blossom Day means to be dazed, drunk even, on such natural joys as “the air still, nothing in it but bees working.” It’s the 1990s, and although Mary Frances is only 12 when the novel starts, she’s already plotting to stay in this place for the rest of her days. That is, if family dynamics allow it. “The Excellent Lombards” is about possession, succession and the uneasy balance of power between multigenerational farmers.

Mary Frances goes by many names — Francie to her mother, Marlene to her father, Frankie or Imp to her brother — but as expertly rendered by Hamilton (whose many novels include “A Map of the World” and “The Book of Ruth”) she’s a storybook character, an inquisitive, imperious but lovable girl akin to Harper Lee’s Jean Louise Finch, Rumer Godden’s Cecil Grey or Ian McEwan’s Briony Tallis. Like them, she absorbs and channels emotion and drama, processing it for the reader as a vested outsider: an outsider because she’s a child, but vested because she wants to have this land, and the life she lives on it, remain unchanged forever.

The kid can be pretty obnoxious. She freezes out a gentleman farmer because he grows a newfangled apple, the Honeycrisp, rather than heirloom varieties (and because he’s more successful than the Lombards). But she’s also an amusing narrator, scoffing at the “righteous” mothers looking only for organic fruit at the farmers’ market and refusing to hear a word in defense of the common sense of integrated pest management: “Those mothers only wished us to know that we were the individuals poisoning their children and Gaia.” Because Mary Frances’ framework for farming, and her love of it, is so obviously shaped by and inseparable from her adoration of her father, it’s not hard to forgive her.

Or feel sorry for her. Her way of life is in jeopardy, from the pressure of encroaching development and the trendy Honeycrisps, as well as the chronic disagreements between Jim and Sherwood, instigated by the fact that Sherwood grew up on the farm and Jim did not. What Mary Frances doesn’t understand — yet — is that this is a repeating cycle. When Mary Frances’ distant cousin Phillip, “a slow-food, locavoring, hipper-than-Alice-­Waters pioneer,” arrives at the orchard after ­college and has the temerity to care about the place, she sees him as an interloper, proving she’s a Sherwood in the making.

Somewhere back in this family’s history there were those first treasured saplings. And somewhere in the excellent Lombard family future, a son or daughter could be sent off with nothing more than scion wood. Only there’s not much wilderness left, not even in the Great Black Swamp. Maybe the best hope is that at least they’ll care enough to be fighting about apples again.

AT THE EDGE OF THE ORCHARD
By Tracy Chevalier
289 pp. Viking. $27.
THE EXCELLENT LOMBARDS
By Jane Hamilton
273 pp. Grand Central Publishing. $26.