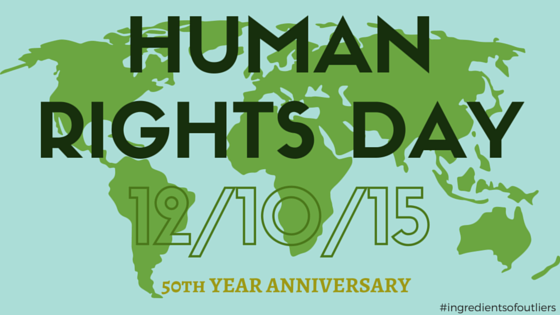 A world recognizing inherent rights, observing each human being’s dignity and worth; it’s the stuff monumental figures Franklin D. and Eleanor Roosevelt were passionate to protect, and it’s what we are celebrating here on the blog today and around the world! These important rights cover culture, citizenship, religious freedom, and more; they touch every person and include more topics than you are probably aware of! For example- did you know it’s every person’s basic right to have a name (something I have never thought of before)?

Our human rights are globally recognized on December 10th of every year. This year is extra special for Human Rights Day (#HumanRightsDay) because it is the 50th year that the movement has been in place!

Human Rights Day is dedicated to promoting the awareness of human right issues the world faces and advocates to improve global human rights. The inception came when the United Nations General Assembly adopted the Universal Declaration of Human Rights.

To learn more about Human Rights Day and the influence the Roosevelts had on this momentous day, click here.

In honor of this special day, we thought we’d highlight a couple real-life advocates for human rights from our very own Outlier Series. With the many freedoms many of us enjoy, the right to vote, the right to be educated, freedom of religion, we forget the causes many are still fighting for or the battles that have been won in our lifetime. We can quickly move on from a proud spirit to apathy and distraction, so let’s take a look at a couple game changers who have made victories in recent history.

Our first human rights activist might not call herself that, but what she has done in her lifetime affects you and me exercising our freedoms while enjoying safety- and this is what equality and human rights are all about.

Outlier Christine Jones is a game changer who has always had a strong passion to make a positive change in the world. Ever since she was a little girl, she has helped those in the local community and always kept a can-do attitude. Paired with a love for others, her drive and talents landed her at Go Daddy as an in-house attorney, eventually serving as Executive Vice President, General Counsel & Corporate Secretary.

What’s so great about Jones though, is she did not simply use her position for personal gain. During her time at Go Daddy, she was a driving force behind significant federal Internet-related legislation, including legislation to protect web users from child predators, and rogue online pharmacies.

It’s probably hard to remember for most of at this point, but when the internet became a household item, many of us trusted online resources inherently, assuming what was published online must be legitimate. We laugh now it the mystique and authority the internet held, but in the early 2000’s, not everyone could launch a WordPress blog at the click of a button, list an item on eBay from their smartphone, or publish a video on YouTube in an instant, much less film it!

Christine Jones was determined to make a difference and to help protect children from pornography and being sold harmful drugs online. She was instrumental in establishing a framework of policy on the Internet by working with Congress and administration to push forward legislation that would make the Internet a better and safer place.

Christine Jones didn’t stop her advocacy for others at Go Daddy. In fact, she kept her love to fight for others and later founded the Registrar Summit – an annual gathering of industry leaders where a set of guidelines and standard operating procedures was developed that, together with legislation she advanced, now governs user conduct and provider responses on the Internet through established industry best practices.

You can find out what else Christine Jones is currently doing by clicking here.

This woman game changer and outlier, Marsha Ternus, became the first woman Chief Justice in Iowa’s highest court while continuing to be an advocate for abused and neglected children in the justice system. She became passionate about the rule of law and its importance on society and leveraged her ability to reach the right people to reform the criminal justice system. She understood that many people won’t speak up on behalf of felons and treat most of them as throwaways, so she spoke out about helping those individuals become contributing members of society.

In 2009, Ternus and 6 other Iowa Supreme Court Justices ruled unanimously to allow gay marriage, an unpopular decision at the time, which would cost three of them, including Ternus, their jobs. As timing would have it, Ternus, Baker, and Streit faced reelection immediately after the unpopular decision. Still, knowing the professional consequences they might encounter, they felt this was a basic human right all people should enjoy. After serving more than seventeen years on the court, Ternus’ term expired on December 31, 2010. In 2009, only Connecticut and Massachusetts allowed same-sex marriage.

In May 2012, Ternus and two of her colleagues on the court were honored with the 2012 John F. Kennedy Profile in Courage award. In announcing the award, the Kennedy Presidential Library stated the three justices “were chosen in recognition of the political courage and judicial independence each demonstrated in setting aside popular opinion to uphold the basic freedoms and security guaranteed to all citizens under the Iowa constitution.

In addition, one of Marsha Ternus’ greatest achievement was providing some leadership on the Iowa Supreme Court to focus the court system’s attention and resources on addressing the needs of abused and neglected children in a more productive, timely, and holistic manner. She also had her hand in deciding that cases involving children’s lives should be expedited as well as bringing collaborative work together to improve the foster care process.

Whether you are fighting for something like education equality or refugee rights, this December cause impacts you or someone you know. We hope you were inspired by these two current day advocates to do something about it. As wise Nelson Mandela once said, “To Deny people their human rights is to challenge their very humanity.”