Originally posted on AZCentral.com: Religion could be an important factor in the race for U.S. House in the East Valley, if voters' questions at a candidate forum this week are any indication. The 5th District, where four Republicans are competing to replace retiring U.S. Rep. Matt Salmon, R-Ariz., is deeply religious and conservative. It includes parts of Mesa, Chandler, Gilbert and Queen Creek. According to two polls of likely GOP primary voters: 53 percent attend religious services at least once a week. 65 percent are Catholic, Protestant or evangelical Christian. 20 … END_OF_DOCUMENT_TOKEN_TO_BE_REPLACED 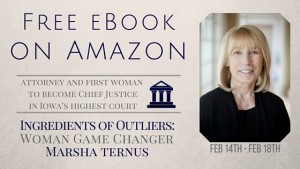 Outliers Publishing announced today that chapter six from Ingredients of Outliers: Women Game Changers in eBook format is free on Amazon.com, today through February 18, 2016. The chapter contains an exclusive interview with Marsha Ternus, the first woman to become Chief Justice in Iowa’s Highest Court. The title of the eBook chapter is Ingredients of Outliers: Woman Game Changer Marsha Ternus. The ebook chapter can be downloaded on Amazon.com and sent to any Kindle eReader, smartphone, or device with a free Kindle application … END_OF_DOCUMENT_TOKEN_TO_BE_REPLACED