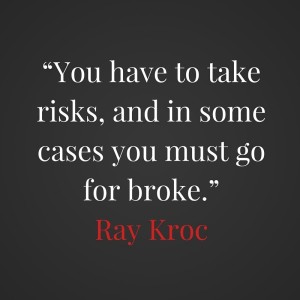 Ray Kroc dropped out of high school because he was eager to start earning money. He started his career working two jobs, one of them included selling ribbon novelties, door-to-door. By night, he would play the piano for pay. He later gave up his two jobs to sell paper cups. Kroc was a noted salesman and soon had 15 employees working underneath him. Eventually at age 35, Kroc left the paper cup business to go out on his own. He took a huge risk and borrowed profoundly to raise the money to start a company that sold milkshake mixers. Kroc’s next endeavor was exceedingly larger. On April 15, … END_OF_DOCUMENT_TOKEN_TO_BE_REPLACED