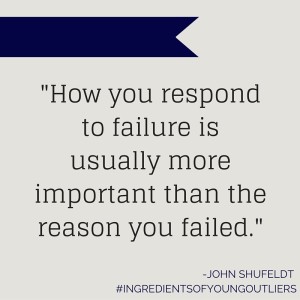 From Chapter 2 "Fail Fast: The Gift of Failure" in Ingredients of Outliers Joanne’s Story Joanne was the older of two daughters born to a London couple who met and married when they were 19. When Joanne was a teenager, her mother became seriously ill and a few years later, at age 45, she died. “It was a terrible time,” Joanne recalled, leaving her with “a literal pain in my heart.” Still grieving, she moved to Portugal, where she’d gotten a job teaching English. Soon after, she married a Portuguese man and gave birth to a daughter. After a divorce, she returned home with her … END_OF_DOCUMENT_TOKEN_TO_BE_REPLACED