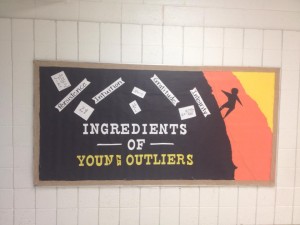 Finley Farms gymnasium in Gilbert, Ariz. was flooded with the eager faces of young students, parents and friends on Thursday, March 27, 2014 to listen to author John Shufeldt talk about his newest addition to the Outlier Series “Ingredients of Young Outliers” and get their copies signed. John’s return to the school was especially meaningful to Mrs. Rico’s class, who is listed in the book’s dedication. In the Fall of 2013, after the first book in the Outlier Series was released, Ingredients of Outliers: A Recipe for Personal Achievement, Shufeldt was invited to the school to read to her … END_OF_DOCUMENT_TOKEN_TO_BE_REPLACED