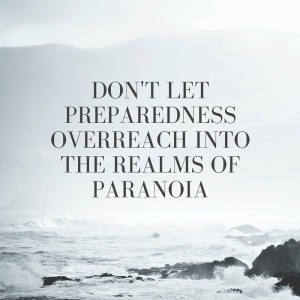 Disaster is inevitable. What goes up must go down and things are always bound to go wrong.  There is a line between being prepared and being overly paranoid. I once read about a man who took out a second mortgage on his home so that he could spend over $350,000 on preparing for the end of the world. The man stated:

“What is certain is that in my lifetime, there is a strong likelihood that there will be a catastrophe of some kind — the sun destroying power grids, a flu pandemic that kills millions, an asteroid or meteor or comet striking earth or a magnetic pole shift.”

He may have a valid point, in that natural disasters seem to be happening every time we flip on the news. But that preparedness overreached into the realms of paranoia, and that is something that need be noted and avoided.

If you are in need of a laugh click here some funny tweets from the night before the “worlds demise” in 2012.

Previous: Stand Out in Your Interview
Next: Near Fatal Experience