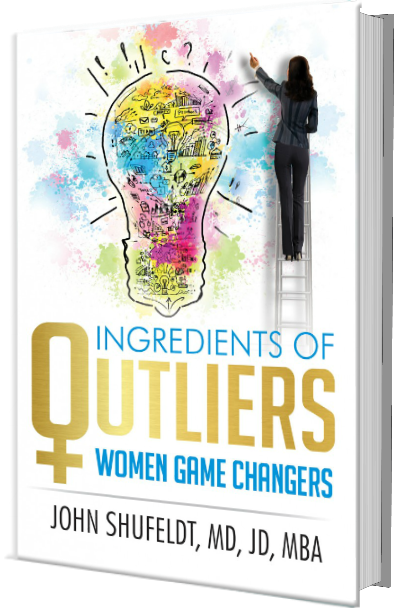 While many of us can quickly name five top-achieving men of our time, many of our forefathers, and a glut of masculine trail blazers, the gap certainly exists between the presence of accomplished, world-changing career women, and the availability of books which represent their powerful voice and life giving stories.

Consequently, Dr. Shufeldt interviewed six remarkable women whose bravery, innovation, and charisma paved the way for others, both men and women, and he began writing his third book in the Outlier Series, Ingredients of Outliers: Women Game Changers.

Dr. Shufeldt calls these chosen individuals: “Outliers,” defined as: “An exceptional person for whom excellence is merely a starting point toward a destination far beyond our normal definition of achievement.”

This book is a kaleidoscope look at the lives of women who have humbly and tenaciously pushed past bristly beginnings and daunting opposition to improve systems and circumstances for those in their midst. They have defended the innocent, nurtured selflessly, and proceeded graciously, yet fearlessly past what they thought was possible. Dr. Shufeldt gathers their insights and advice through thought-provoking interviews and uncovers expert tips, and the potent truths that carried these women beyond their wildest expectations.

The women in this book include:

Read now and take advantage of the opportunity to get to know this diverse group of accomplished women, and let their expertise and leadership pave the path for your pursuit of excellence.  Join the ranks of the women outliers who embody empowerment and strive after greatness.