Finley Farms gymnasium in Gilbert, Ariz. was flooded with the eager faces of young students, parents and friends on Thursday, March 27, 2014 to listen to author John Shufeldt talk about his newest addition to the Outlier Series “Ingredients of Young Outliers” and get their copies signed.

John’s return to the school was especially meaningful to Mrs. Rico’s class, who is listed in the book’s dedication. In the Fall of 2013, after the first book in the Outlier Series was released, Ingredients of Outliers: A Recipe for Personal Achievement, Shufeldt was invited to the school to read to her class.  To much surprise by John, the students resonated so closely with the material in the book, which was originally intended for a professional audience, that they began in-class readings, and gradually a dialogue between the students and Dr. Shufeldt formed. Mrs. Rico, who witnessed her students’ engagement with the book firsthand, and even passed along a personal note from a student to John, recommended that he write a book intended for young students. Thus began the writing process for his newest book, and his important return on March 27th with copies of Ingredients of Young Outliers: Achieving Your Most Amazing Future available for the same fifth grade class.

At the book signing, Shufeldt shared his personal life experiences and several stories about extraordinary individuals that he has encountered, both of which were his inspirations for writing Ingredients of Young Outliers.One story told by Shufeldt was especially appreciated by the kiddos, for it’s comic relief. In entrepreneurship, “humility” (one of the traits featured in the book) is sometimes brought about by completing the menial or less glamorous tasks associated with a business. This is what lead to John sharing the story with the students:

Being a Chicago native, Shufeldt  knew the mystique and cult following in the Windy City of a Chicago-style hot dog. He decided opening up an outdoor hotdog stand in Phoenix, Arizona, here he lived and worked would be a great entrepreneurial venture. He hadn’t considered how the hotdogs would sell during the Summer months, with outdoor temperatures exceeding 100 degrees; neither did he have a back up plan if one of his employees called out sick. One morning, after working a busy night shift in the ER, his employee assigned that day called to cancel her shift. This left John no other option but to rush over after his 12 hour shift to man at the hot dog stand. During the lunch rush, John caught a man in line staring at him intensely. 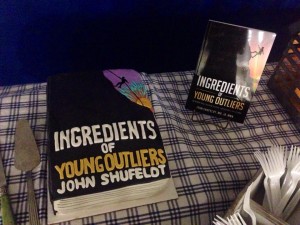 “I don’t think so,” responded Shufeldt

“You look familiar,” said the man “do I know you from somewhere?”

“Wait a minute, you work in the hospital,” said the man “you stitched up my foot last week… and you left some glass in it!”

Slightly taken aback and embarrassed, but without missing a beat, Shufeldt responded

“That is why I’m selling hot dogs today.”

As Shufeldt put it, sometimes people are humbled in humorous ways and failures are inevitable, but we are given an opportunity to persevere during hard stuff that sets an “outlier” apart from the rest.  Or as Tom Hanks puts it in A League of Their Own, “If it wasn’t hard, everyone would do it. It’s the hard that makes it great.”
If you were unable to attend, have no fear! This is the first of several book signing events that will be held in the Phoenix area for the Outlier Series. The Outlier team will keep you posted on the next opportunity to meet John and learn more about the essential ingredients that make up an Outlier.